I have known about this track/TT iron for a year and have singularly failed to go and see for myself. The current owner has put her up for sale on eBay. The listing follows the description.

This is a beautifully crafted Reynolds 531 machine with refined and filed Nervex Pro lugs, straight undrilled seat and chainstay bridges and a classic twin plate fork crown which is drilled to take the mandatory TT brake and lovely round fork blades. The dropouts, front and rear have mudguard eyes which rather confirm the view that this frame was intended for NCU events. 58cm (23”) seat and top tubes and what appears fairly relaxed geometry.

The frame has been refinished in a typical period mid blue during the Durban Road era in late 60’s early 70’s style with white head, down tube and seat tube panels. It would probably have had panels and possibly fine bands to replace of the small panels when originally finished in the 50’s, very similar in appearance but with a question mark on which style of DT transfer was used, Deco or Gothic? The replacement Red Gothic Script gives a good contrast but I do not yet know when it became available.

The MN on the BB shell together with the 5718 in the right stamps on the steerer column confirms the build as genuine. Some frames for special riders had no stampings at all but in those cases other proof would be needed.

Was repainted in the past and supplied with later Durban rd decals from major himself after inspecting the bike, originally would of had Reform Street transfers.” 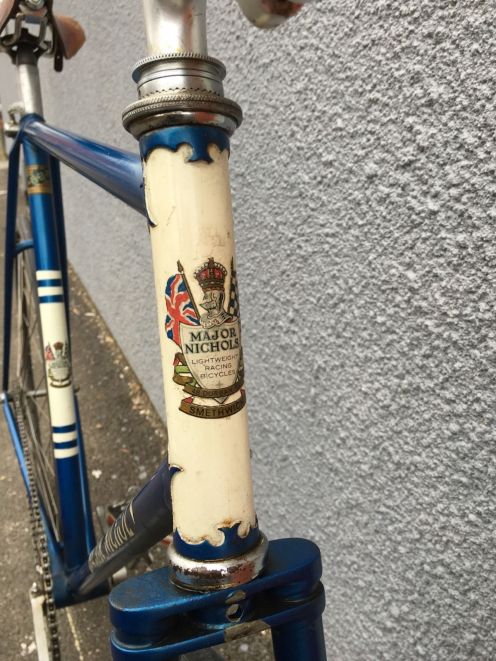